The MTV EMA generation change, the Syrian boy Mohammed El Gendy, was nominated for the award.

“The 17-year-old soldier, who had fled from Syria to the camps in Lebanon, was nominated to do everything in his power to get refugee children to education,” the committee said on its website on Monday (October 30th).

Despite the difficult circumstances he and his family experienced in Lebanon, they managed to establish a school of 200 Syrian refugee students, according to the committee’s website.

The soldier competes with four others from Afghanistan, Britain, Nigeria and the United States.

The results will be announced on Sunday, November 4, at the Central Theater in the Spanish city of Bilbao, at a concert featuring the most important artistic figures.

“Kids rights”, through her Twitter account, called for the soldier’s support and vote for him, because Mohammed’s receipt of this award helps to highlight the issue of educating Syrian refugee children as one of those children deprived of their right to education for several years because of war , But chose to struggle for his arrival and other children’s access to the study seats through several educational projects.

The vote ends at midnight on Monday.

Mohammed Al-Jundi has already won the International Peace Prize for his achievements in educating refugee children in Lebanon by the end of 2017.

The issue of educating Syrian refugee children in Lebanon’s camps is a problem that international organizations seek to contain. The latest humanitarian action was the production of a film about two Syrian girls without education, with the participation of film star George Clooney in cooperation with Google.

The young Syrian doctor, Mahmoud Hussein Farzat, won first place in robotic surgery in Germany, and was honored by the… 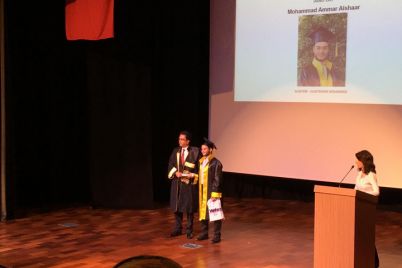